Bob D’Eith was elected as the MLA for Maple Ridge-Mission on May 9, 2017. He was re-elected for a second term on October 24, 2020. He currently serves as the BC NDP Government Caucus Chair and is the Parliamentary Secretary for Arts and Film. He previously served as Chair of the Select Standing Committee on Finance and Government Services.

In 2021 Bob D’Eith was honoured with the prestigious Queen’s Counsel (Q.C.), designation, which recognizes exceptional merit and contribution to the legal profession. For twenty-eight years, as an entertainment lawyer, author and music consultant, Bob D’Eith has helped Canadian musicians achieve their dreams. For over a decade as Executive Director of Music BC, he was a fierce advocate for the music industry and co-creator of the award-winning artist development program “The PEAK Performance Project.” Additionally, Bob spent many years serving on the Maple Ridge-Pitt Meadows Arts Council.

Bob is a two-time JUNO Award nominated recording artist and founding member of the musical group “Rymes with Orange.” For 20 years, Bob has produced, written and performed with the duo “Mythos,” a group that had major label releases and achieved Top 20 status on the Billboard Charts.

As a father of five, one of Bob’s strongest motivators to run for office was his children. Watching his children attend overcrowded, under resourced classrooms with very limited arts funding pushed him to advocate for increased resources for our children’s schools as their sports fields were overtaken by portables.

While serving as BCNDP Government Caucus Chair and Parliamentary Secretary for Arts and Film, Bob also sits on the Legislative Assembly Management Committee, Treasury Board, and the Special Committee of Selection.

Bob has lived in Maple Ridge-Mission with his wife and children for the past 19 years. 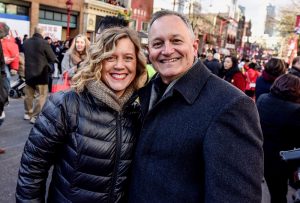